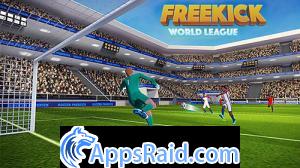 Supported On:Android Ice Cream Sandwich (4.0) or later
Soccer world league freekick - step on a green lawn of a stadium, run fast and kick the ball. Decide the result of every match in penalty series. In this Android game you will need to take your favorite national team to victory in the world championship. You are going to play as a forward and a goalkeeper. Swipe the screen to select the trajectory of the ball flight and force of the kick. Outwit forwards and a goalkeeper of the opponent team, score goals, surprise fans. Defend your gates, moving the goalkeeper to different sides, catch balls.
Rate This Games
Ratings : 3.1 / 5 ,Total Rated: 761