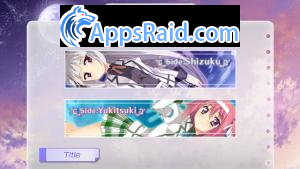 All text and menus are in ENGLISH.

Fragments Note 2 is a slice-of-life visual novel/dating sim featuring Kyoichi Akikawa, a boy who lost his family in an airplane accident, the heroines close to him, and the story that binds them together.

Both routes are selectable from the start, but to fully enjoy the game, we HIGHLY recommend playing Shizukus route first!

Completion of the first Fragments Note is also recommended.