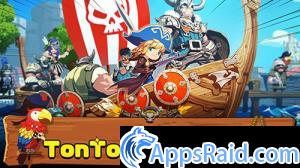 Supported On:Android Jelly Bean (4.(1-3)) or later
Tonton pirate - become the best South seas pirate. Step on board of a sailing-ship, hire pirates to join your crew, fight against enemy ships. Go to hunt treasures in this merry Android game. The treasures are hidden at the ocean bottom as well as on board of other ships. Shoot from on-board armament and sink enemy ships! Seize rich trophies and spend gold of pirates for upgrading your ship, buying better cannons, hiring pirates and so on. Unlock new lands and fight against other players.
Rate This Games
Ratings : 0 / 5 ,Total Rated: 0